Last week I took a trip during which I needed to record three podcasts (Liftoff, Download, Six Colors Subscriber Podcast) with guests who would be participating via Skype. I almost took my trusty old MacBook Air with me, but I decided to see if I could figure out a way to replicate the bulk of my home recording setup without requiring a Mac.

In the past, I’ve done something similar using the Audio-Technica ATR2100-USB, a microphone that can output a digital signal using USB and an analog signal via an XLR cord simultaneously. The problem is that the last time I tried to use the ATR2100-USB with my iPad Pro, it didn’t return my own voice into my ears, making me unable to judge the sound quality of my own microphone. After years of having my own voice return to me, I strongly prefer not to record unable to hear my own voice. (I use in-ear headphones that largely shut out audio from the outside world, so the experience of speaking while not hearing yourself is even more profoundly weird than it would be with leaky earbuds.)

This time I wanted it all, or at least as close to all as I’m able to get with iOS in the mix: A pristine recording of my own voice, that same high-quality microphone audio also flowing across digitally to my podcast guests via Skype, and the ability to hear both my guests and myself at the same time.

I made it work with the addition of one box to my usual iPad workflow. Here’s what I did:

You may already know that in order to create a podcast, you’ll need a few important pieces of hardware: good quality podcast headphones for monitoring your audio quality and levels, reliable podcast microphones for you and your guest/s, a podcast mixer that will allow you to record from multiple audio sources, an audio interface to convert sound signals into digital format, and a laptop that. Windows & Mac free downloads here Soundplant turns your computer keyboard into a versatile, low latency sound trigger and playable instrument. Via drag & drop, easily assign sound files of any format and length onto 88 keyboard keys, creating custom soundboards that put hours of instantly-playing audio at your fingertips with no extra hardware. Mac laptops are a favorite among creatives, particularly musicians. You’ll need to note that there’s an extra piece of hardware you’ll need in order to stream with a Mac. Laptop: MacBook Pro 13” 1.4GHz 8th Gen i5 128GB Storage $1299USD. Hub: USB C Hub Adapter with Ethernet, HDMI and USB 3.0 ports $39USD. A common and simple piece of podcast equipment is the USB microphone, which plugs straight into your computer. USB mics are ideal for beginners, especially folks who do solo/monologue-style shows, and those running online interview podcasts. Check out our USB.

First, I plugged an analog XLR microphone into my Zoom H6 recorder. That solves the “get a pristine recording of my own voice” problem. But how to get that audio out of my Zoom recorder and into my iPad Pro? If I plug my headphones into the Zoom, I’ll be able to hear myself but not my guests. If I attach the Zoom to the iPad, I can relay my audio—but the Zoom is unable to record audio when it’s being used as a USB audio interface.

Second, I need to route my microphone audio out of the Zoom to a device capable of transferring it to my iPad Pro (and also transferring the voices of my panelists from the iPad back to me). Any standard USB audio interface should be more or less capable of that, and so I used mine—the Sound Devices USBPre2. The trick was how to connect the Zoom to the USBPre2. Fortunately, the zoom has a Line Out port on its front, and the USBPre2 has a line-in port on its side, and I happened to have the right cable (minijack on one side, stereo RCA on the other) to connect the two of them in my random drawer of audio cables.

Third, I attach my USB audio interface to my iPad Pro. (I used a USB-B to USB-C audio cable for this, but an old-school cable will also work with an adapter.) I haven’t yet met a USB device that my iPad Pro is incapable of powering by itself, so the USBPre2 worked just fine. I also attached my headphones to the USBPre2, so I could hear myself and my guests. 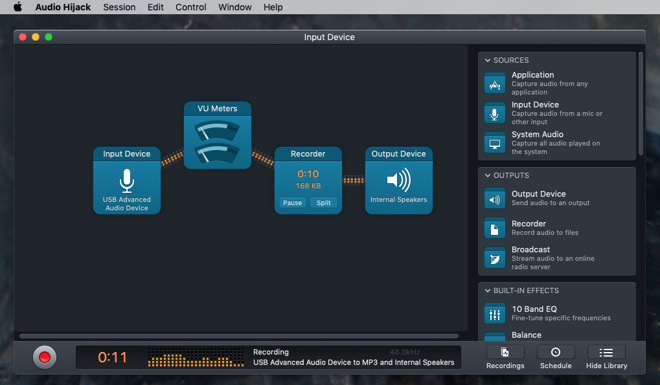 That’s it! I could launch Skype, press record on the Zoom, and record a podcast. My guests heard my high-quality microphone audio, I could hear them, and I could hear myself (with no noticeable latency). The only thing I’m really missing is the ability to record my guests’ audio too, as a backup, but I chose to live dangerously and speak only to people who know what they’re doing when it comes to recording for a podcast.

The final step was one that I’ve described before, namely using an external Wi-Fi box to transfer my audio files back to my iPad for editing. This workaround remains until the day where Apple decides to let iPads see external storage devices directly. Then it was off to Ferrite to put the podcasts together after the participants sent me their files and I imported them into Ferrite. (As an added bonus, in a recent update, Ferrite has gained the ability to split multi-track QuickTime audio files into their component tracks. Ecamm’s Call Recorder for Skype uses this approach and until Ferrite was updated, I’d have to use a Mac to split those audio files in two. No longer.)

And that’s it! It’s not pretty, it’s two more boxes than I’d otherwise bring, and I refuse to weigh the difference in boxes and compare it to the weight of my 11-inch Air. The important thing is that I was able to travel with my iPad and no Mac and have more or less the same podcast experience that I have when I’m sitting at home at my iMac.

If you appreciate articles like this one, support us by becoming a Six Colors subscriber. Subscribers get access to an exclusive podcast, members-only stories, and a special community.

As of the end of 2012, the Levelator is no longer supported or being updated by The Conversations Network. We have therefore stopped accepting donations.

Please continue to download and use the most-recent versions. 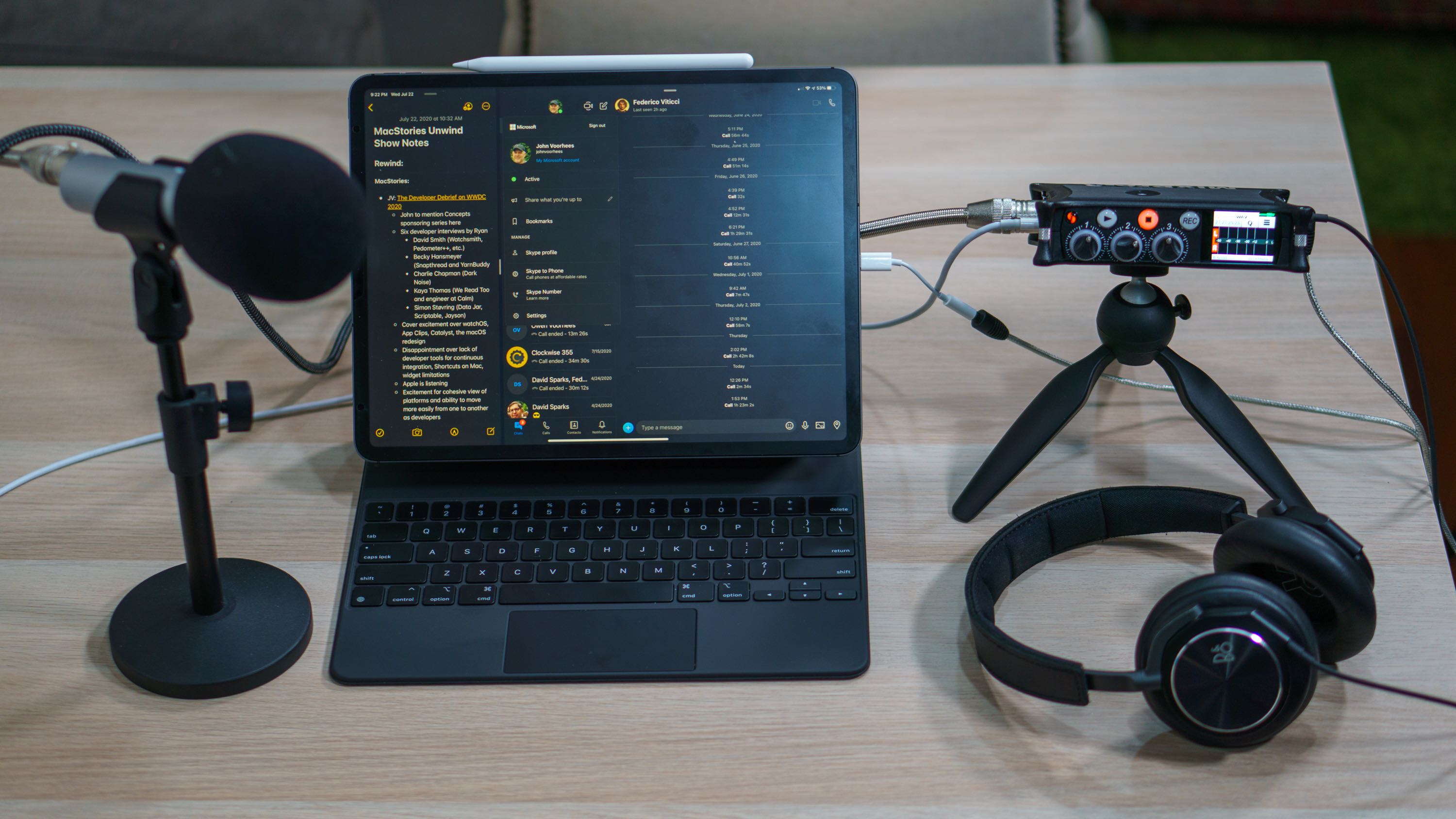 Do you believe in magic? You will after using The Levelator® to enhance your podcast. And you'll be amazed that it's free, now even for commercial use.

So what is The Levelator®? It's software that runs on Windows, OS X (universal binary), or Linux (Ubuntu) that adjusts the audio levels within your podcast or other audio file for variations from one speaker to the next, for example. It's not a compressor, normalizer or limiter although it contains all three. It's much more than those tools, and it's much simpler to use. The UI is dirt-simple: Drag-and-drop any WAV or AIFF file onto The Leveler's application window, and a few moments later you'll find a new version which just sounds better.

Have you ever recorded an interview in which you and your guest ended up at different volumes? How about a panel discussion where some people were close to microphones and others were not? These are the problems the post-production engineers of Team ITC here at The Conversations Network solve every day, and it used to take them hours of painstaking work with expensive and complex tools like SoundTrack Pro, Audacity, Sound Forge or Audition to solve them. Now it takes mere seconds. Seriously. The Levelator® is unlike any other audio tool you've ever seen, heard or used. It's magic. And it's free.

When we developed the IT Conversations component-based show-assembly system, we realized all the components had to be of the same loudness or the results would sound awful. We limped along for many months using the RMS normalization functions in various applications, but the results weren't satisfactory and it required tools and skillsets that some of our post-production audio engineers didn't have. One of our best engineers, Bruce Sharpe, offered to write a standalone software RMS normalization utility, which we've been using as part of our production system CNUploader since 2005.

The CNUploader's normalizer acts similar to an intelligent RMS-based compressor/limiter combination, and it therefore affects primarily the short-term (transient) sounds and the long-term overall loudness of the file. It doesn't make the kind of adjustments that a skilled audio engineer can perform in software or at a mixing console, riding the levels up and down to compensate for medium-term variations.

There are some hardware devices such as various AGC (automatic-gain control) components that can do moderate leveling, but since they have to operate in real time (i.e., without look-ahead), they can't do much. And they aren't cheap, let alone free. Even a skilled human can only react to changes unless s/he is lucky enough to be present during a recording session and can use visual cues to anticipate coming variations. Software can do better by performing multiple passes over the audio, generating a loudness map of where the volume changes. (It's not actually that simple, but the metaphor is helpful.)

Bruce, with help from his son, Malcolm, had proven that he knew how to tackle these problems in ways that no one else anywhere in the audio/software industry has done to date. So we asked him, 'Bruce, do you you think you can write a leveler that corrects for medium-term variations in loudness instead of the short-term and long-term variatons processed by compressor/limiters and normalizers, respectively?' Bruce and Malcolm took on the challenge, and eight months later we began testing The Levelator®.

The Levelator® is brought to you by:

Levelator® is a registered trademark of The Conversations Network.